5 reasons to switch to organic food for a healthier life

5 reasons to switch to organic food for a healthier life 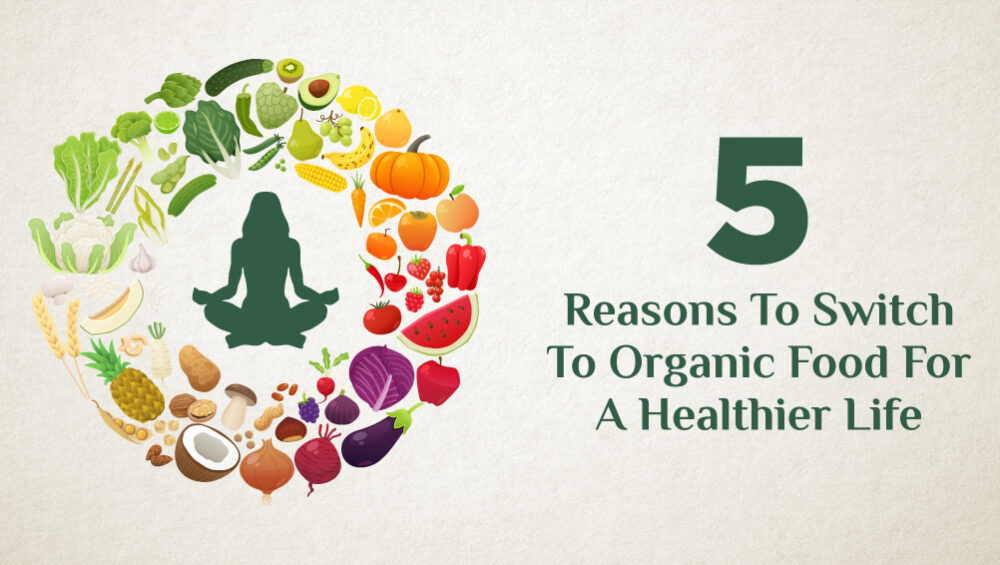 “switch to organic food”, If you are a millennial then you must have seen your parents and grandparents being healthier than you are. And whenever you asked the secret to their healthy body, the answer would be rich quality food. Back then, farming methods did not involve chemicals such as pesticides and synthetic fertilizers. So, basically, all food was organic. But over the last few decades, farming practices have changed your diet and consequently your health.

Yet again if you are a millennial then you know the importance of health more than ever. So, before it gets too late, you should opt for organic food. And to boost your health, here we’ll give you more reasons to switch to organic food once and for all:
Organic food is not modified
While roaming in the vegetable market, you might have come across yellow, red and green bell peppers. Despite being called with a single name, these three vegetables are distinct in terms of colour and health benefits. And this differentiation is the result of the GMO process.

GMO stands for Genetically Modified Organisms where two or more organic food is raised in conjunction with a single chemical to make a new breed from the same vegetable family. But the infused chemical reduces the healthy properties and flavours of organic food. Moreover, chemically infused food can lead to chronic disease if consumed for a long time.
Organic food has no toxins
From normal cold and flu to skin diseases, your body suffers a lot due to air pollution, water pollution and global warming. Over time, once minor health problems turn into chronic diseases such as uncontrollable blood pressure and less body energy.

On top of this toxicity, the local food obtained through conventional methods uses pesticides, herbicides, growth hormones, synthetic fertilisers (produced from fossil fuels such as oil) and antibiotics. These chemicals add more to toxic elements which you are already surrounded with. And your only escape remains is to opt for organic food which does not use those chemicals.
Organic food has more nutritions
Organic food goes through strict production guidelines laid out by organisations such as USDA. Out of which, one guideline requires organic farming certification. Organic farming certification not only ensures the health of organic food but also of soil. Over the years of unreplenished soil with natural matter forced local farmers to add synthetic fertilisers in the soil. This force-feeding led to degraded soil and you can imagine the number of nutritions available in that plant now.

On the other hand, organic food, as mentioned earlier requires organic farming certification. Here, farmers need to let the soil do their job without any chemical interference. Most of the time, specific organic food can grow rich with nutritions in a particular environment only. For example, Organic Black Pepper from Kerala, India is considered as the King of spices because of its rich flavour and health benefits.
Organic food is richer in flavour
Taste is a very subjective matter and it differs based on your preferences. But it’s an undeniable fact that Organic food has more layers and have interesting taste unlike conventional food found in malls. Moreover, conventional plants are produced under a stressed environment which strangles the growth of fruit or flower buds. So, now you know why pulp and seeds are decreasing day by day in your tomato from a local market.
Organic food prevents many diseases
As you age, the power of your immune system decreases and you become more prone to illnesses. On top of this, food with pesticides in them weakens your immune system and welcomes many chronic diseases. And you end up paying long hospital bills in the long run. Instead of paying those bills, why not prevent the diseases from the beginning?

The rich in nutritions organic food is known to prevent heart-related diseases. Also, there is a considerable debate on the international platform regarding the benefits of organic food versus conventional food. But science back the organic farming and it produces on the bases of healthy properties.switch to organic food

According to WHO (World Health Organisation) cancer patients are likely to increase by 70% in two decades if people’s lifestyle remains the same. So, before debating over which food has more toxins, everyone should make a conscious choice of healthy eating habits.